Iceberg A68 is a giant iceberg having calved from Antarctica’s Larsen C ice shelf in July 2017. Initial surface of the A68 was 5,800 km2 which makes it one of largest icebergs on record. Contrary to expectations, it has not decayed, its biggest part called A68a area currently amounts to 4,200 km2, which is ten times larger than the area of the Tri-City in Poland. After drifting over 900 nautical miles, the iceberg approaches the South Georgia and the South Sandwich Islands. The iceberg and the chunks detached from it are supervised due to the threats posed by ships sailing in this area. Scientists predict that the ice will settle in the shallows near the island. 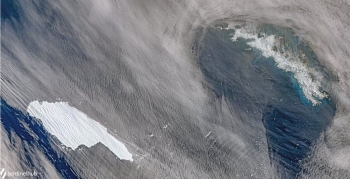