According to the definition proposed by Hobday et al. 2016, oceanic heat waves are discrete  abnormalities of the surface temperature lasting for at least 5 days, and exceeding the 90th percentile of the 30-year average for a given place and season.

Local ocean surface temperature anomalies are a long-standing phenomenon known to have destructive and long-lasting effects on the complexity of the ecosystems they affect. Since satellite observations began in the 1980s, the frequency of oceanic heat waves in the world increased from 25 to 55 per year. Some of them appear with some regularity, like el Niño, others are new to the ocean system. The latter category includes "the blob" which haunts the Northeast Pacific. Blob has been observed every year since 2013, and in 2019 it lasted over 200 days on an area of ​​8 million km2. In September 2020, the water west of Canada, on an area of ​​over 9 million km2, was 4 ° C higher than the average temperature. In view of the destructive impact on the ecosystem and also on the economy, a system has been created to define and forecast the conditions for the formation of ocean heat waves in that region, MHW Tracker. 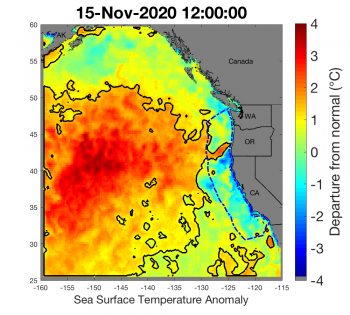